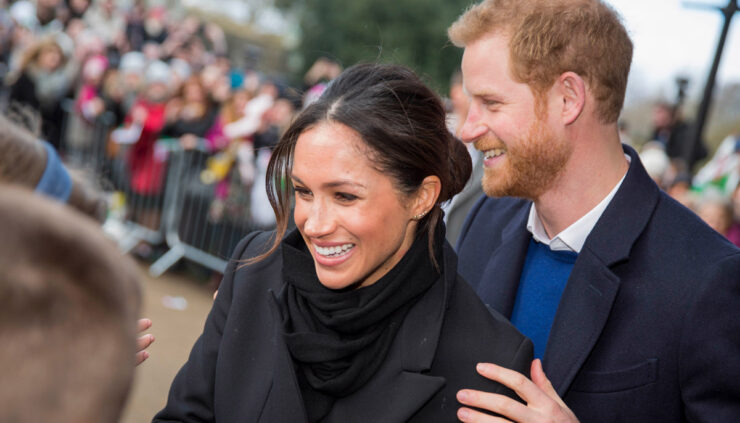 We talk a lot about compatibility on this platform, and what makes for a good romantic pairing astrologically. And while we go into serious detail in our love match posts, talking about elements and modalities and the like, there will always be couples in the public sphere who seem to contradict everything astrology says about what makes for a good partnership.

And here’s where it gets a bit interesting, because generally speaking, looking at a couple’s sun signs is a good marker for compatibility. But it’s not the only marker. There are two other big factors to consider (among many, many others): their moon signs and their rising signs.

So today we’re taking a look at the couple who’s perhaps at the top of everyone’s minds right now. Meghan Markle and Prince Harry are a Leo and Virgo sun, respectively. These two signs aren’t typically shipped, astrologically speaking — at least not at face value. But let’s examine what might make them work so well, despite being seemingly “incompatible.”

Meghan is a Leo, so she innately is a passionate, expressive, warm, and generous individual. This placement also explains her career as an actress before she entered royal life, as well as the fact that she’s craved her own platform and share of the spotlight in her new role.

This has obviously led to a fair share of friction with the royal family. But being the Leo she is, she has not backed down. We saw that plainly this last week.

Harry, on the other hand, is a Virgo sun. It may have taken him a while to come around to his more grounded and responsible traits, but we’ve seen them appear in his military education, his royal duties, and perhaps most of all, to his young family.

Virgos are often considered to be too mired in details to see the big picture, but Harry obviously hasn’t fallen into this trap. Instead, he’s taken on the dutiful role of protecting his wife and children from the same treatment he saw his mother fall victim to.

So while we’d typically say that Leos view Virgos as too practical, and Virgos see Leos as too frivolous, these two have found a way to work as a team. And if we look further, we may find clues as to why.

Meghan is a Libra moon. This means that on an emotional level, she relates to people from a place of fairness, balance, peace, and love. It’s a very gentle sign, if a little indecisive at times. She likely has a hard time with not being everyone’s cup of tea, though she might not let that show too much on the outside.

This very much explains the hard time she had with the press (and her new inlaws) in the early days of her marriage. And that inner sense of fairness and balance spurred on her determination that she was being treated unfairly, and her decision that she didn’t want that same life for her children.

Harry is a Taurus moon. This is an auspicious placement for family men. A Taurus moon gives him a grounded and yet open approach to his emotional life and relationships. And once again, that earth energy comes in as a protective force.

And while at first glance they might not seem so compatible — Libra is a cardinal air sign and Taurus is a fixed earth sign — they have one very big thing in common. Taurus and Libra are both ruled by Venus, the planet of love and beauty. This means that on a fundamental level, Meghan and Harry seek common ground in their emotional relationship: love and honesty.

Lastly, we come to the couple’s rising signs; in other words, how they relate to others, and the world at large. Meghan is a Cancer rising, which will probably explain her main subject of comparison: Princess Diana was a Cancer sun. And as Harry has watched Meghan face the world with much of the same love and energy as his mother did, and he’s seen just how much pain it has caused her, it’s no wonder that he’s stood by her side and done what he could to make her happy.

Because Harry is a Capricorn rising (so much earth energy in this man!), and while Capricorns can get a bad rap for being the “grownups” of the zodiac, they get off on playing that role and making sure that everything — and everyone — is right in their world. And if that means laying down some serious boundaries for the good of themselves and their family, it’s not even a question.

So as you can see, sun signs play a huge role in a couple’s compatibility, but it’s certainly not the only role. And in digging a little deeper, you can often find the beautiful ways in which two people relate to each other on many different levels, even if it doesn’t make sense at first glance.